Hit enter to search or ESC to close
Alt-RightEditorialPoliticsUSWorld

What happened in Charlottesville yesterday was a tragedy for two reasons.  First, an innocent person has been killed and 19 other innocents wounded because of their political opinions, and second, some of the worst people on the planet get to claim the moral high ground and get to say that they are victims. I want to begin by talking about a few things that few others will be discussing.  Because of the car attack, everything else is more than likely going to get shifted off the table but a lot of things have happened in Charlottesville, other than the attack, that I think are important.

The first of which is the fact that the Alt Right occupied a college campus two nights ago. In a gorgeous torchlight rally, on the campus of the University of Virginia, a massive crowd marched through the campus, at night, towards a statue of Robert E. Lee.  There were a few counter protestors but the Alt Right essentially owned that space and that campus for the night. That is huge and those are the type of rallies that can create a mythos around a group, that can begin to create legends and those legends have far more power than the event its self ever could have. 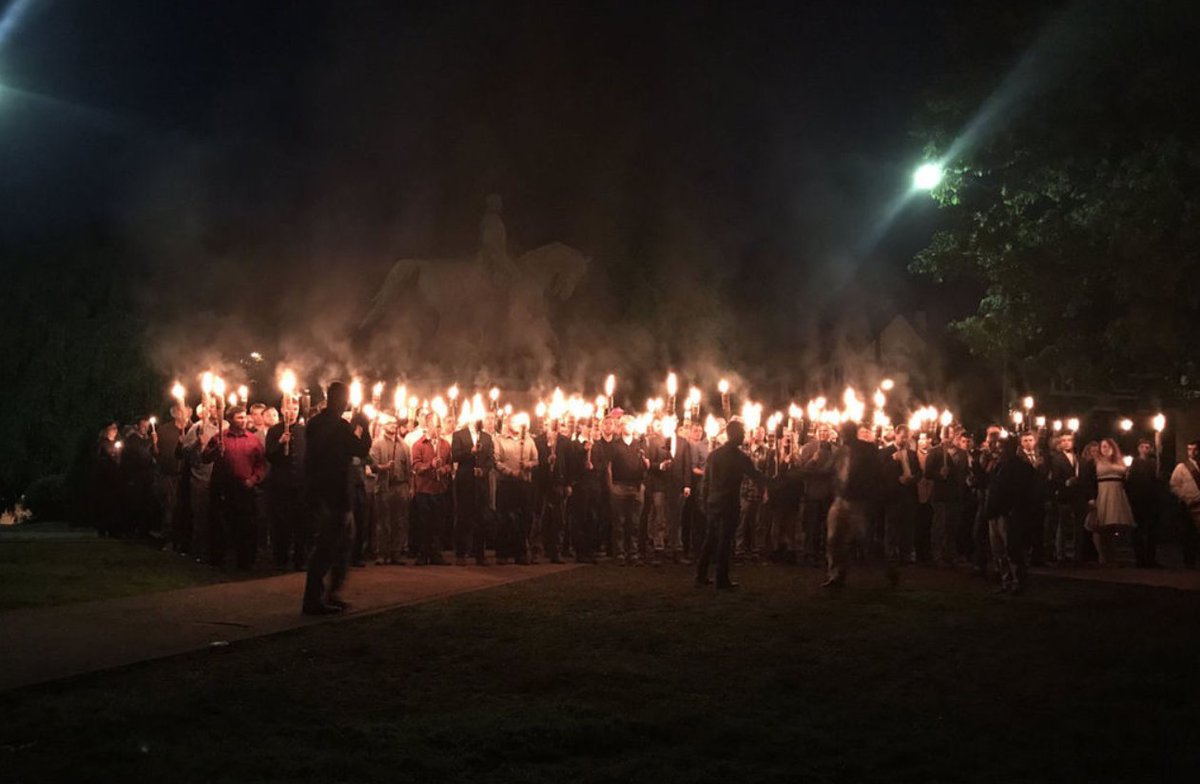 The second important event is the fact that the governor of Virginia decided to defy an order from a federal judge.  A federal judge ruled in favor of the organizer of the “Unite the Right rally” in his petition to keep the rally at Lee Park, slave name- emancipation park, instead of moving it to a park much further away, as the city manager ordered them to do.  The federal government sided with the rights of the Alt Right to hold its rally in Lee Park.

A few hours into the rally, the Governor of Virginia, and close friend of Hillary Clinton, Terry McAuliffe (token white male Democrat #1 of 25) declared the rally unlawful and had law enforcement forcefully remove them from the park. So apparently it’s “we is States rights now” week in Virginia.  Or perhaps Terry McAuliffe is just honoring the proud history of the Confederacy by nullifying federal rulings. So, keeping all of this in mind, there was indeed an attack upon left wing counter protestors in Charlottesville.  So that’s what?  White Nationalists- 2, Muslim terrorists- 500.  This was a horrible attack but I cannot muster too much emotional feeling for people who have been perfectly willing to shrug off dozens of terrorist attacks against white Europeans because those attacks were unfortunately necessary for the triumph of a multicultural society.

These counter protestors hate me because I am white.  They want to see my people destroyed and made extinct and I’m supposed to what?  Weep for them?  Most of the counter protestors were white, so their fellow protestors and leftists should be celebrating.  Because of that car attack, there are fewer white people today than there were yesterday, isn’t that what the Left wants?  I am confused.  They want the extinction of whites as a race but a few white leftists dying is a tragedy to them?

I have seen too many pictures of white people with their limbs blown off, too many stories of white children being raped while leftist either celebrate or cover it up, too much pain and suffering inflicted upon my people to feel much of anything when the people who support the death of my people are themselves killed.  But of course, don’t ever do anything like this.  It’s wrong and it doesn’t accomplish anything.  We don’t need to do this, we are beating them in every argument, violence isn’t necessary.