Hit enter to search or ESC to close
CultureUS

Courage in Taking a Knee

Colin Kaepernick’s decision to sit during the national anthem last year and the ensuing spectacle of demonstrations across the NFL have ignited passions across America.

My personal take on national anthems is that when they are being honored, one should show respect to the people around him by abiding by local customs. Although most of my politics are anti-statist, I do love America and honor it when given the opportunity. It upsets me when individuals choose to raise personal political issues at these times.

As an expat currently residing and teaching English in Thailand, I display respect when the Thai national anthem plays. Twice a day, “Phleng Chat Thai” plays on radio broadcasts, over PA systems, and on loudspeakers publically. Everyone stops in their tracks silently or hums along until the anthem is done.

(Note: I have observed shrinking public adherence to this tradition since the 2014 coup d’etat.)

I do as the Thais do. Not necessarily because I respect Thailand or its government, but because I want to be polite and respectful towards the people around me. The Thai people have treated me well, so it is the least I can do to say thanks.

But my personal feelings about flags, national anthems, and politeness have no bearing on what others must do. Each man has his right to express himself in his own way. And I have the right to be offended by and criticize his actions.

Six points I’d like to get out of the way before getting to the issues of courage and non-courage are:

I believe what the kneeling NFL players are doing is courageous.

According to Merriam-Webster, courage is mental or moral strength to venture, persevere, and withstand danger, fear, or difficulty. The players are taking a moral stand against the wishes of their fans and, in all likelihood, their employers and endorsements. They are putting their reputations on the line and facing backlash. All of this could negatively affect their careers and futures.

Courage is all about putting skin in the game to do what you believe is right.

Obvious examples of courage are soldiers disobeying unjust orders, firefighters entering burning buildings to rescue strangers, and anyone who puts themselves between bullies and their prey.

Less obvious examples that occur on a daily basis are special education teachers persistently attempting to educate the seemingly unteachable, eyewitnesses and journalists testifying truthfully even if it undermines an angry mobs’ preferred narrative, and, now more than ever, individuals expressing politically incorrect opinions they believe are important.

I have seen several great examples of courage, as well as many examples of non-courage, over the course of the past year.

One that stands out is Sally Yates standing up to President Trump. Yates was the acting attorney general, set to serve until Trump had his own appointee confirmed by the Senate. When Trump made his infamous executive order to temporarily ban immigration from several majority-Muslim nations, Yates ordered the Justice Department not to defend the order in court. Here is part of what she wrote: 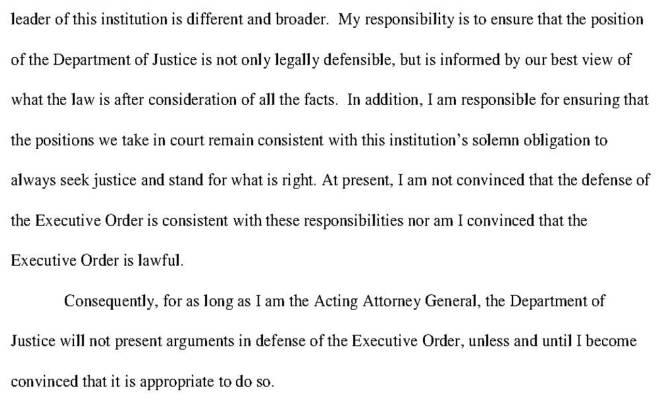 Non-courage is my term, and one that you will not find in the dictionary. But it means exactly what it appears to mean: the absence of courage. Non-courage encompasses both cowardice and acts that are neither courageous nor cowardly.

No individual exemplifies non-courage quite like Vermont Senator Bernie Sanders. Sanders advocates for what he believes in, most famously economic equality. But rather than prove that wealthy individuals can survive well enough with less, Sanders receives a hefty government salary from taxpayers and has recently purchased his third home. Sanders would like the government to confiscate and redistribute enormous amounts of wealth, but he does not have the courage to forcefully take that wealth himself. Sanders surmises to gain power, influence, and more wealth by having his political aspirations come to fruition without sacrificing or risking anything of his own. Little could be further from courage.

Al Gore gives Sanders a run for his money in the non-courage department. Gore has parlayed a career in politics, an industry that produces nothing of value, into a vast sea of wealth. He is now most famous for his environmental activism. But rather than lead by example in leaving a carbon footprint lower than the average American’s, Gore’s swimming pool alone uses enough energy to power six average American households for a year. Gore has only gained from his activism thus far, and loses nothing if his preferred policies are put into place.

In 2002, Bill Maher’s Politically Incorrect was cancelled after he said the 9/11 hijackers were “not cowardly.” He in no way implied that they were virtuous or good, but simply said that they were not cowardly. Attributing positive character aspects to terrorists at that point in American life was risky and highly controversial, which made it courageous.

Maher was courageous and right. The terrorists died for what they believed in. Being wrong does not negate one’s courage.

I won’t kneel with the players (and obviously not the terrorists). But for the sake of courage, I will stand for the truth, even if I don’t like it.